I have found an interesting article that explains the rationale behind putting Sweden and Spain in perspective. The paper analyses the relationship between birth rates and attitudes toward Gender Equality in a range of countries. The conclusion is that traditional family structures in developed countries correspond to lower birth rates, while other countries with more Gender Equality in the workplace have higher rates.


Here is a short summary of the article. A UN survey asked respondents if they agreed or disagreed with the statement that “a man’s job is to earn money; a woman’s job is to take care of the home and family.” 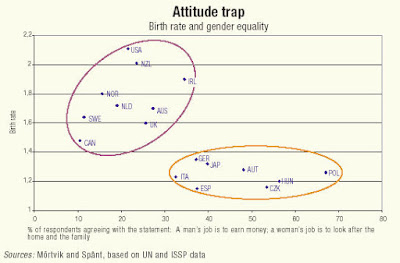 The data seems to support the idea that, in modern societies, attitudes that keep men at work and women at home hold down birth rates.

Sweden and the Nordic countries, the US and Canada show favourable attitudes toward Gender Equality and  comparatively higher birth rates.

On the other hand, Spain Germany, Japan and Italy continue to face a “fertility trap” with lower birth rates.

“The need to raise female participation employment is widely recognised, but the problem is seen as regulatory, and the challenge of underlying social attitudes seems to be underestimated, even overlooked. Put simply, women in societies with traditional values towards family and gender equality ironically postpone or abstain from childbearing.”

In a nutshell, the article highlights the need to shift the mindset towards more Gender Equality to promote birth rates and sustained economic development in Spain.