As Nicci Gerrard describes in the Book review, she had an eventful life. When she was 18, she was a single mother working in Stockholm far away from his son Lars. She had some difficult years. Then she became a very successfull writer and her tax bill one year was above 100% of her income.

Astrid comes from VImmerby, a small town in a region of Sweden called Småland, where I have spent a lot of time during my childhood. I have always enjoyed her stories and the environment she recreates in her books.

This article - Pippi Longstocking – rebel role model- speaks about the impact of Astrid Lindgren who "was not exactly proceeding from an explicit feminist agenda" "That, however, has not prevented Pippi from becoming a source of inspiration in the struggle for gender equality. Throughout the world, girls have been encouraged to have fun, to be a bit more daring and to have faith in their own ability". "Pippi Longstocking has encouraged countless girls to believe in themselves, both in Sweden and abroad."

She has encouraged countless girls to believe in themselves

She is "the strongest girl in the world" and she is proud of her freckles. If you read the book, you will find out Astrid Lindgren was strong as well. She was a teenager when Women's suffrage was approved in the Swedish parliament in 1919, and confirmed in 1921. At the time, women where getting their hair cut short against the tradition (as Astrid did, of course). To me both are excellent symbols for equality and the fight for women rights. I hope you enjoy the book.

Let me finish this post with the start of Pippi Longstocking´s first book, the chapter when she moves in to Villa Villekulla.

"Way out at the end of a tiny little town was an old overgrown garden, and in the garden was an old house, and in the house lived Pippi Longstocking. She was nine years old, and she lived there all alone. She had no mother and no father, and that was of course very nice because there was no one to tell her to go to bed just when she was having the most fun, and no one who could make her take cod liver oil when she much preferred caramel Candy" 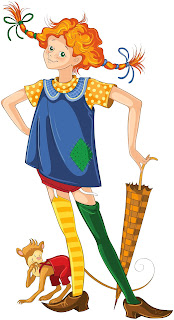